The Halfling by H.D. Gordon

Posted on April 6, 2016 by paisleypiranha

When Aria Fae gets cast out of the Peace Brokers, a secret supernatural organization that’s trained her since infancy, and is left to fend for herself in the human world, she finds herself in Grant City, intent on attempting a normal human life.

As a Halfling, Aria has abilities that are a little underused in the flower shop she lands a job at. And when her new friend Samantha Shy enlists Aria to help investigate her mother’s death, the two girls decide to become vigilantes.

A new drug called Black Magic is running rampant in the streets of Grant City, turning people into supercharged maniacs. With Sam’s mad computer skills, and Aria’s Faevian abilities, they may be just the heroes Grant City is in need of.

Or they may find out they’re in way over their heads, and their mutual crush on the same guy is the least of their worries. 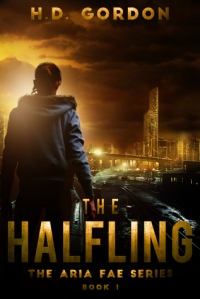 This was tremendous fun – it read like a comic book movie in story form, for girls.

It also read as a mash-up of a buddy and a superhero story. Aria made a great kick-ass heroine, and her friendship with Sam Shy (love her name!) was fabulous. H D Gordon took some YA conventions and gave them refreshing twists: the school bully Aria “rescues” Sam from isn’t a spoiled princess, but a wiry athlete and boxer, while her victim is a bona fide computer genius.

I wasn’t quite convinced by the romance thread with Caleb Cross, although again I liked the twist that the two friends liking the same guy were able to joke about it rather than turning to instant enemies over a boy. I think my main problem with it was that Reid was so obviously hotter than Caleb!

I’ll confess I got a little bit confused by the backstory and the sorceress queen at the end. From what had been said before I though she was responsible for the death of Aria’s mother, but it turned out she was on Aria’s side.

And the writing wasn’t quite as tight as it could have been in my opinion – there were quite a lot of diversions into telling rather than showing (e.g. don’t tell me Reid is “devastatingly handsome” show me how he is!). I found this particularly in connection with the use of filter words (“I felt”, “I thought”, etc) – where filter words appear the character’s experience has already been processed so what the reader gets is a tell rather than a show of raw feeling or action, which can be quite distancing. But heck, if you’re not a stickler like me you might not even notice this.

I loved the characters, I loved how the plot progressed and different elements all tied together, and (this is the first in a series) I even loved how it finished its own story but set up the next one – very intriguing.

Four piranhas from me.

Disclosure: I received a free copy of this book from YA Book Bound in exchange for an honest review. That’s what I’ve given it.

Katy Haye writes fast-paced fantasy for YA readers. Check out The Last Gatekeeper and The Last Dreamseer.