Victoria Gemmell is interviewed in the next edition of Book Bites. Sign up here.

Follow Me is great debut novel that is at different times sad and scary, but also moving and engrossing. The heroine Kat is a wonderfully normal, likeable girl placed in a very difficult situation. And the hero – well you are kept wondering about him until the very end. 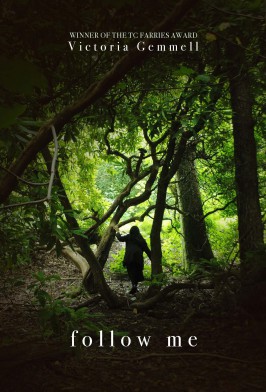 This is a disturbing, addictive book very like The Barn which plays such a central role in the story. We are rooting for Kat, who is trying to cope with the unexplained suicide of her twin sister Abby. Like Kat, we are drawn to get to know the people who were close to Abby and can’t help but be attracted and disturbed in equal parts. Who are these people who hang out at The Barn, who are obsessed with Andy Warhol? They aren’t your normal teenagers, that’s for sure. More than once you want to shout to Kat – No! Takes care! But until the very end we aren’t sure who she should be afraid of and who she should trust. A well-paced story that keeps you reading.

This is an excellent novel for anyone at the older end of the YA age range (and adults, of course!). It deals with difficult issues such as suicide, grief and murder. It does so in a way that doesn’t belittle them, but nor does it dwell on them in the way some issues-driven books do. It isn’t standing up waving, saying ‘look at me, I’m writing about issues’. It is first and foremost a good read, with a confused but appealing heroine and a hero we are attracted to but really not sure about. In fact, the novel has something of the gothic threateningness I remember from Victoria Holt books I read in my own teens. That is some achievement.

Gill-Marie writes YA mystery/romances as Gill-Marie Stewart. As Gilly Stewart she also writes women’s contemporary fiction. The first book in her YA series about George and Finn is Music and Lies (try out the first chapter here).

Want reviews and fab YA stuff? Sign up for Book Bites . Victoria Gemmel is interviewed in the next edition.

This entry was posted in contemporary, fiction, friendship, Romance, teen, Uncategorized, YA, Young Adult and tagged Book review, Follow Me, Gothic, Victoria Gemmell. Bookmark the permalink.
%d bloggers like this: