The Masterpiecers by Olivia Wildenstein

Nineteen-year-old Ivy Redd’s talent with a needle and thread has earned her a spot on a coveted reality TV art competition set in New York’s Metropolitan Museum. The prize: a significant amount of money and instant acceptance into the Masterpiecers, the school that ensures new artists fame and fortune. Her talent has also thrust her and her twin sister, Aster, into the spotlight.

Not that Aster needed help with becoming a media favorite. She managed that on her own by running over a wanted mobster. She told the police it was self-defense, because she couldn’t tell them the truth—the truth would make her sister look bad.

Locked in an Indiana jail to await her trial, Aster watches Ivy on the small TV hanging in the dayroom. It’s the highlight of her day, until she finds out what her sister truly thinks of her. Then, observing her sister becomes a punishment far crueler than imprisonment. 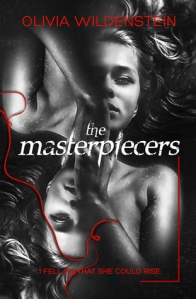 Who doesn’t love a good story featuring twins? And twins with secrets is even better.

The Masterpiecers is told in alternating narratives from Ivy and Aster, and I’ll admit they were a little confusing at the very beginning (both first person) but that soon settled down. While twins, they are very distinct and very different.

The concept of The Masterpiecers was fabulous – basically, it’s The Apprentice meets Great British Bake Off in a fine art setting. I don’t generally do reality TV, but I thoroughly enjoyed this.

The pacing was excellent – I’d pick up hints and start wondering about something just before it would be revealed, and there were some brilliant layers. I got a good sense of Aster’s naivety at the start – there were thing going on that she didn’t seem to realise she should even be guessing at, and then I started to see Aster in a completely different way (I would say more, but … spoilers).

The writing was very strong, too. I got a real sense of Aster and Ivy’s moods towards the end – my heart rate picking up when theirs did.

If I’m niggling (which, clearly, I am), the end felt a bit hurried. I wasn’t sure I understood fully who’d done what and why, and the romance didn’t entirely convince me. But it’s very well worth a read.

One side-effect I wasn’t expecting: I want a trip to New York now to check out the museums and galleries!

I received a free copy of The Masterpiecers from YA Bound Book Tours in exchange for an honest review. That’s what I’ve given it.

Katy Haye writes fast-paced fantasy for YA readers. Check out The Last Gatekeeper and The Last Dreamseer.

2 Responses to The Masterpiecers by Olivia Wildenstein