Posted on July 6, 2017 by paisleypiranha

Three months ago, Romy emerged from the cultivation tanks after a year floating inside.

Now she undergoes regular testing as doctors work to find out … well, she’s not exactly sure what.

The tests must have something to do with the reason she can’t remember her knot—the single lucid memory the other insane soldiers on Orbito Four still possess. Whatever the researchers are searching for, if it aids the soldiers in the deathly war against the lethal alien invaders—the Critamal—the excruciating pain is worth it.

But a grey-eyed man has other plans.

Boxed in and caught, Romy is taken hostage by people who shouldn’t exist. They dress in black and carry weapons she’s never seen in her genetically enhanced life.

Fifteen months have passed since her world shattered into bright red, ringing chaos. Things have changed—people have changed. How long until what was once as familiar as breathing is familiar once more?

Can the new Romy reconcile with the old, or will the two halves of herself remain locked in an internal battle?

And if a victor should arise from this silent war . . . will it be the part of her that kills without hesitation, without mercy?

All it takes is for the cracks to join and blood will pour…. 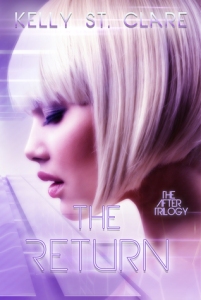 I loved The Retreat, so I was first in the queue to get a copy of The Return when it came out. It’s another stonker. Kelly St Clare gets better with each book.

The world-building was deft and convincing, with tremendous scope for tension between the priviledged and ordinary settlements.

And the characters were something else! I agreed with Elara that crazy Romy was SUCH fun … until she got all heart-breaking. This was some very powerful writing. And Romy wasn’t alone. The entire cast was fabulous. I even ended up liking Tina, which I wouldn’t have thought possible.

To add to a brilliant world and a vivid bunch of soldiers – enhanced and not – there were twists and turns galore. I got that something was up, but I really didn’t see that ending coming! My only complaint: have I really got to wait for the next one?

The Return is science-fiction at its glorious best. Get a copy.

This review is a departure for Katy Haye, who has challenged herself to read her way through the alphabet during 2017 – when she doesn’t get distracted. Tune back next week when she should be back on track with a review of her “Y” book: Marie Lu’s The Young Elites.

When not reading, Katy writes speculative YA fiction. Post-apocalyptic romance, Rising Tides, was recently shortlisted for the 2017 RONE Awards.