Posted on September 21, 2017 by paisleypiranha

Who knew a knock at the door could rupture your entire world?

They don’t demand money or possessions…they want much more than that, they want your life.

Maverick is preparing for senior year: he’s no longer stuck in the “friend-zone” with the girl of his dreams, he’s looking forward to choosing the right college and being on his own, and he plans to have a blast along the way.

But a knock on the door changes all of that forever.

Maverick begins a mind-altering, life-changing journey to discover the truth—a truth that certain individuals will do anything to keep hidden. 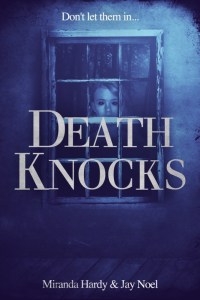 Available exclusively in Shattered Worlds. Get your copy (to buy or via KU) now!

Ooh, this was so atmospheric. It was creepy as all get-out! I guess you would class it as horror, but it was chilling rather than gruesome. In common with the best horror, Death Knocks took something utterly ordinary (a knock at the door) and made it terrifying.

There was a small cast of characters, all of whom were beautifully depicted (I had a particularly soft spot for Marcus and his oft-uttered “shiitake!”), and the alternate narration from male/female points of view worked very well.

It was refreshing for YA that the romance wasn’t front and centre (these people are in peril of their lives, folk!), which somehow made the emotional moments stronger.

It’s first in a series, so be warned that there are some loose threads at the end, but if you want a powerful, unsettling read, this is it! I can’t wait to read on.

Love chatting about books? Death Knocks features on the Shattered Worlds read-along happening on Facebook right now. This is your chance to chat to the authors, take part in fun contests and quizzes, and snag some bookish prizes.